Having received a report of gunshots in the vicinity, security guard Ember creeps into the office suite carrying her trusty assault rifle. She quickly finds the nude body of a secretary named Verronica, but doesn’t notice the killer creep up behind her!

Shots ring out and Ember is dropped before she can aim her rifle. The killer rips off Ember’s blouse and panty hose, then proceeds to fuck her bleeding body on the table. Ember heroically launches a counterattack and almost succeeds in killing her attacker with a knife! Unfortunately, he had a blade of his own and slid it into Ember’s lovely torso.

With her subdued, the killer proceeds to have his way with her bloody corpse. She briefly coughs and sputters again, but he mercilessy dispatches the bitch with repeated shots from his pistol. He leaves both naked corpses for someone else to worry about.

Note: Actresses are over 18 at the time of filming and the word “teen”, “teenage”, “young girl” is only meant to imply legal age characters regardless of audience interpretation. 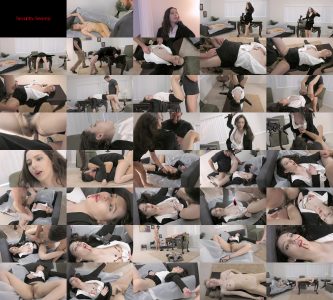